Lawmakers to Californians: Do as we say, not as we do 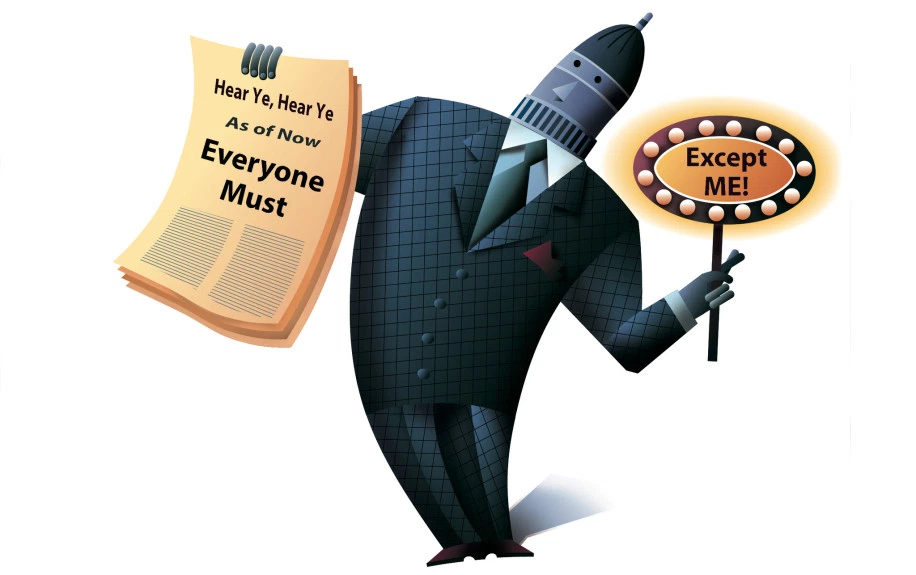 One group of California government workers has never had whistleblower protection under the law: those who work for the lawmakers themselves. It’s an example of how the Legislature sometimes imposes laws on other people that it doesn’t adhere to itself. Illustration: Dan Hubig for CALmatters

With a declaration that “public servants best serve the citizenry when they can be candid and honest without reservation in conducting the people’s business,” lawmakers passed the California Whistleblower Protection Act in 1999.

The idea was to protect workers who report misconduct, so that they can blow the whistle on bad actors without losing their jobs. The bill at that time covered workers at state agencies and California’s two public university systems. Lawmakers expanded it in 2010 to cover employees of the state’s courts.

But one group of California government workers has never had whistleblower protection under the law: those who work for the lawmakers themselves. It’s an example of how the Legislature sometimes imposes laws on other people that it doesn’t adhere to itself.

“Lawmakers make laws that affect all of us, including them, and they are softening the blow of regulations for themselves,” said Jessica Levinson, a professor at Loyola Law School who chairs the Los Angeles Ethics Commission.

The Legislature’s exemption from the Whistleblower Protection Act has garnered attention in recent weeks, as a groundswell of women complaining of pervasive sexual harassment in the state Capitol publicly call for such protections for legislative employees.

But the whistleblower act isn’t the only area of the law in which the Legislature has demonstrated a “do as I say, not as I do” mentality:

Want to know whom government officials are meeting with, talking to or emailing? Or how officials were disciplined after an investigation found them culpable of wrongdoing?

Instead, lawmakers are covered by the Legislative Open Records Act, which they passed in 1975 in the wake of the Watergate scandal. The act that applies to them is riddled with exceptions, effectively keeping secret many documents that other branches of government must disclose.

“The Legislature has created in many areas a black box where the public can’t see records it would be entitled to see if the public officials at issue weren’t in the Legislature,” said David Snyder, executive director of the First Amendment Coalition, a nonprofit organization advocating government transparency.

The Legislature’s open-records law allows it to withhold investigations of wrongdoing, even when they led to disciplinary action. It also keeps secret correspondence by lawmakers and their staff, as well as officials’ calendars. The Legislature even refused to give reporters the calendars of two senators undergoing federal prosecution on corruption charges, until media companies sued and won a court order compelling their release.

Another difference: As more government agencies began storing information electronically, the Legislature updated the Public Records Act in 2000 to compel disclosure of digital records. Now state agencies and local governments must provide public records in any format in which they exist. That gives the public access to electronic records, such as databases, in their original digital format.

But the Legislature has never made the same update to its own open-records act. “It was a non-starter,” former Assemblyman Kevin Shelley told the Sacramento Bee in 2015.

The idea that government meetings should be open to the public, and designed to welcome public input, has been enshrined in California law for more than 60 years. In 1953, the Legislature passed the open-meeting law that applies to local governments, and in 1967 it passed a similar one for state agencies.

Yet the 1973 law it passed requiring open meetings of the Legislature does not follow the same rules. One major difference: It allows legislators to gather secretly in partisan caucuses.

When contentious issues hit the floor of the Assembly or the Senate, it’s common for one political party or the other to pause proceedings and call for a caucus. Legislators file out of the chamber and into two private meeting rooms where Democrats and Republicans separately gather for conversations that exclude the public and the press. They can hash out disagreements or craft strategy behind closed doors, then return to the chamber to publicly cast their votes.

Local governments, such as city councils, cannot do this. With a few limited exceptions, state law forbids a majority of a local board from gathering privately precisely because it shuts the public out of the decision-making process.

“I always remember county supervisors being rankled,” said Peter Detwiler, a retired long-time staffer to the state Senate’s local government committee. “‘You guys put these rules on us and you don’t ever put rules like that on yourself.’”

Legislators, until this year, did not have the same constraints. Though most bills go through a months-long process of public deliberations, a handful of bills each session were written just hours before lawmakers cast votes on them, leaving the public no time to offer their input. Democrats who control the Legislature said the last-minute lawmaking allowed them to put together sensitive compromises that could have blown up with more public scrutiny.

But voters grew frustrated with the secrecy. A Republican donor worked with non-partisan good-government groups to put Proposition 54 on last year’s ballot, requiring that bills be written and posted online for at least three days before lawmakers can vote on them. The result: voters put a rule on legislators that the politicians wouldn’t put on themselves.

Out of state travel

With culture wars raging nationally over transgender rights, California’s liberal Legislature last year passed a law banning state-funded travel to states with laws that discriminate against gay or transgender people. Eight states are now on California’s no-go list. Some have laws that could forbid LGBT people from adopting children or exclude gay students from some school clubs; others have banned anti-discrimination policies that would allow transgender people to use the bathroom that matches their identity.

Yet while legislators have banned state-sponsored travel to Alabama, Kansas, Kentucky, Mississippi, North Carolina, South Dakota, Tennessee and Texas, they haven’t stopped traveling to those places themselves. In June, Democratic Sen. Ricardo Lara traveled to Texas for a conference of Latino government officials. Soon after, Democratic Sen. Bob Hertzberg went to Kentucky to study the state’s bail system.

Hertzberg was working on legislation to overhaul bail in California, and “felt it critical to observe first-hand the impact of bail reform in (Kentucky), which has a very well-established system of pretrial release,” his chief of staff Diane Griffiths wrote in an email.

The travel-ban bill does not exempt lawmakers—a late amendment actually specifies that it also applies to the Legislature—so how are these trips taking place? Lawmakers are getting around the law by using campaign funds (not tax-dollars) to pay for them.

The Legislature’s leaders declined to defend the exemptions, but in the past lawmakers have contended that they are justified because of the unique role of a law-making body and the need to protect legislators’ security. As far as critics are concerned, legislators get away with making exceptions for themselves because they know their hypocrisy won’t attract enough notice to generate mass outrage.

Right now there’s plenty of attention on the Legislature over its policies for dealing with sexual harassment—and some debate about whether extending the whistleblower act would help remedy the problem.

As is, the Legislature has internal personnel policies that forbid retaliation, and legislative employees are also covered by a different state law that prohibits retaliation for complaining about discrimination or harassment. But the whistleblower act goes even further, laying out a process for workers to confidentially file complaints to the independent state auditor.

Lawmakers will yet again consider a bill giving whistleblower protection to legislative staff when they return to Sacramento next year. GOP Assemblywoman Melissa Melendez of Lake Elsinore plans to re-introduce a measure that has stalled in the past. And—in a nod to some who say her bill wouldn’t apply to employees reporting sexual harassment—she said she’ll add language explicitly stating that it does.

Sign up to join the coalition and stand with us to hold politicians accountable!